About the Wisconsin 4-H Hall of Fame 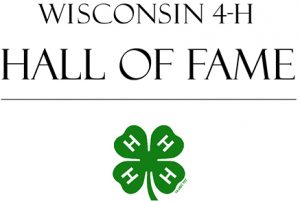 The genesis for our Hall of Fame began with discussions about how UW—Madison Division of Extension 4-H Youth Development should celebrate our Centennial in 2014. Three broad themes came out of initial planning: we need to capitalize on this opportunity for the future; take pride in our accomplishments; and celebrate our past.

This Hall of Fame is established to recognize 4-H volunteers, financial supporters, staff, and pioneers who made major contributions to the 4-H movement at the local, state, and national levels. The candidates represent 4-H in the broadest sense – they may be 4-H volunteers, financial supporters, UW—Madison Division of Extension professionals, or staff employees who had an impact on the lives of children, their community, or state through significant contributions of time, energy, or financial resource to 4-H and its members. The names of some are very recognizable, as sites and buildings bear their names. Others, while not broadly known, have transformed the lives of children and families with whom they’ve worked and the communities in which they’ve lived. The Hall of Fame preserves Wisconsin’s 4-H history and development while increasing awareness of the Wisconsin 4-H Youth Development program.

Any group or individual is eligible to submit a nomination for consideration.
(Both Nomination forms below are the same, only in different formats.)

All nominations must be submitted electronically to lpine@wisc.edu no later than May 20, 2022. Complete nominations include a:

Selections are made by a state-level committee based on submitted nominations including a UW-Madison Extension educator’s signature.
Recognition

Recognition will be in conjunction with an existing event; the virtual 4-H Hall of Fame will be updated annually with photos and bios of the honorees.