The Best Month in Costa Rica! Thanks to 4-H!

This summer I was one of two people selected to go on the 2018 Costa Rica Exchange from Wisconsin. Through the WI 4-H International Program, I traveled with twelve other 4-Hers from around the United States to Costa Rica.   I was placed with a host family in the San Jose Province, but more specifically Turrubares County. While living in Costa Rica for a month, I learned very much about the culture while I was trying new things and meeting new people.

During the course of the month, I saw many different places, tried new foods, and met a lot of people. I was able to go to my host sister’s school for two of the four weeks while I was there; it was very different because they only spoke Spanish and their school year goes from March to the end of November. The school systems in Costa Rica have very relaxed schedules and it made going to school fun and very exciting. The school I went to had a two week (Winter Break), and during it I spent more time with my host family around their farm. My host parents and I would spend hours milking their twenty-five cows by hand, and I can only imagine how long it takes them to do it all by themselves.

One of my favorite things I did in Costa Rica was going dancing with my host sister and friends. Dancing is a huge part of the culture in Costa Rica and everyone there knows how to dance in their own style of the Tango, Cha Cha, or Salsa. I spent time learning how to do most of the steps of those dances from my friends from Costa Rica. Another thing I did there, that was very common was walk. I walked almost everywhere that I went. I even went on a walk with some friends from school that turned out to be a thirteen mile hike. I also drank water out of a waterfall on that hike, because my host sister did not tell me that we were going to be climbing up a mountain and that I should’ve brought along water.

One of the things that I found very unique about Costa Rica is that they have a lot of different types of fruit. So many different types that they didn’t even know what some of them were called in Spanish or English. The farm that I lived on was in the middle of the mountains and we had many different fruit trees in our yard, like star fruit, mango, lime, and others. Another thing that I found special to Costa Rica is that everyone had a hammock at their house. I spent a lot of time sleeping and relaxing in the hammock we had at our house. My host dad bought a hammock for me and gave it to me just before I left.

Costa Rica was an amazing trip and I am so blessed to have been given the chance to travel there! Thanks to 4-H, I have been able to go and experience a new way of living, and make new long lasting relationships with the people I met in Costa Rica. 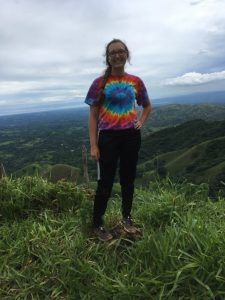